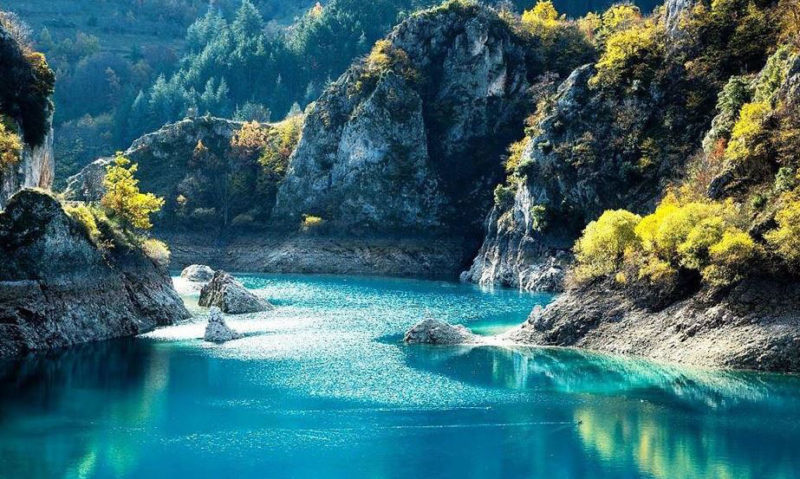 CANYONS OF THE SAGITTARIO

Deep and spectacular calcareous rocks modelled by the corrosive action of the River Sagittario in millions of years. This is what you see at the Regional Nature Reserve – the WWF Oasis of Gole del Sagittario, in the Municipality of Anversa degli Abruzzi (AQ). The area extends for approximately 450 hectares.
This deep canyon also offers refuge to the Marsican brown bear, now threatened by the fragmentation of the woodlands.
The Marsican brown bear (Ursus arctos marsicanus) is a sub-species of the brown bear which exists nowhere else in the world apart from Italy, between the National Nature Reserve of Abruzzo, Lazio and Molise, the National Nature Reserve of the Majella and the neighbouring Apennine areas. Smaller than its Alpine and European “cousin”, it has grown accustomed after centuries of isolation to a close cohabitation with man. Recent studies have confirmed its genetic, ecological and behavioural uniqueness.  In fact, it would seem that this millenary coexistence with man and human activities has even influenced the particularly tame behaviour of these bears. Unfortunately, the population now consists of little more than 50 animals and is considered to be “critically endangered” by the IUCN (International Union for Conservation of Nature) and in risk of extinction.
The WWF has been defending these bears since 1966 when, together with wolves and other species, their culling was believed to be necessary. However, their relationship with man continues to be a difficult one. In the last 25 years, 63% of Marsican brown bears have died through causes associated with man and in 40% of these cases, their death was caused directly by illegal hunting.  With the 2×50 project, the aim of the environmental association’s project is to double the population of Marsican brown bears and take their number to 100 by 2050.

Fill out this form to receive our periodic newsletter.
* Mandatory fields.
COOKIE POLICY
This site uses proprietary and third-party cookies to send you advertisements and services in line with your preferences.
If you want to find out more or deny your consent to all or some types of cookies, click here.
By closing this banner, scrolling down the page or clicking on any element on it, you give your consent to the use of the cookies.
I AGREE