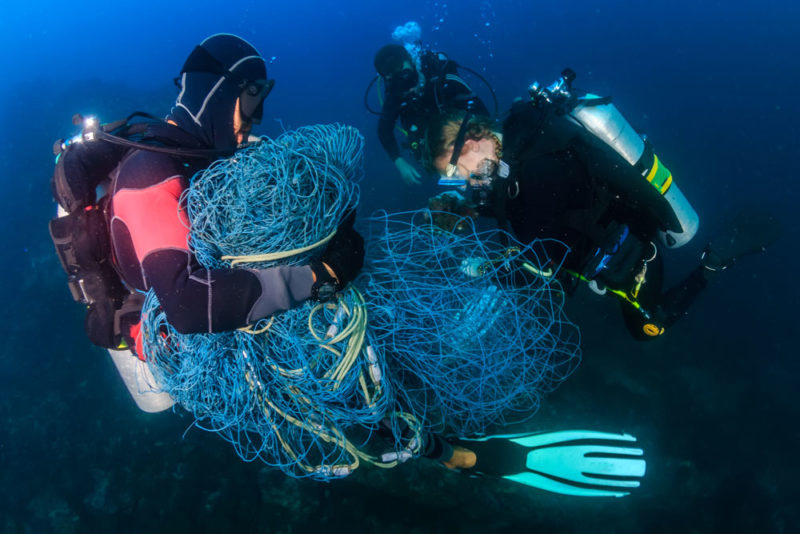 Every year, 570,000 tons of plastic end up in the Mediterranean waters, the equivalent of dumping 33,800 plastic bottles into the sea every minute. At global level, more than 90% of the damage caused to marine wildlife by waste pollution is due to plastic. Besides packaging, a terrible hazard is posed by abandoned ropes and fishing nets that enwrap and entrap the animal. These so-called “ghost nets” continue to capture fish and other marine animals who end up dying by suffocation and starvation. Another issue not to be overlooked is the damage caused to the fishing industry, since among the animals entrapped on the sea bottom are food fish species targeted by the latter.
To respond to this emergency, WWF launched WWF SUB – Save Underwater Biodiversity. With its SUB project, WWF has established in the Italian seas and the Mediterranean waters another garrison in defence of our blue planet. By seeking the engagement of divers – professional scuba divers, swimmers who enjoy exploring the underwater world or go skin diving and snorkelling – and dozens of diving centres operating along Italy’s eight thousand kilometre coastline, the aim is to clean up the seabed and promote the creation of the greatest-ever citizen science ocean network.
EUROJERSEY supports WWF Italia in this new adventure!