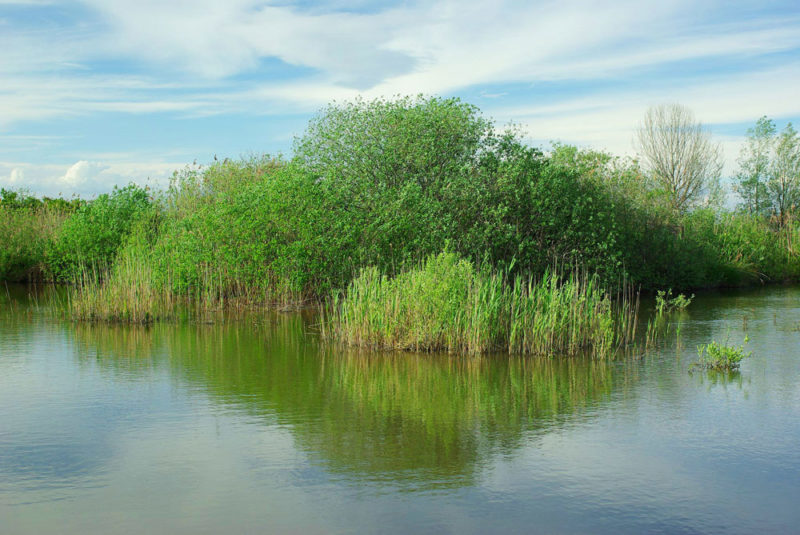 In the course of the last century, 90% of the wetlands have disappeared in Europe alone and this dramatic decrease in their habitat has endangered or caused the extinction of many plant and animal species.  Among the endangered species we should mention the Purple Heron (Ardea purpurea), a bird that builds a nest out of reeds and is one of the few herons to lay eggs “on the ground”. Many protected areas have been created for its conservation, and the WWF has played a significant role with its Oases.
This is the case of the “Busatello Marsh”, an expanse of wetland between Veneto and Lombardy that was spared by the numerous reclamation programs carried out in the Po Valley since the 19th century. The area has survived till the present day thanks to the ancient activity of sedge and cane logging, which has prevented the progressive filling of the marsh. This activity, which has now virtually disappeared, has been replaced by an active management of the wetland to preserve the habitats of its plants and animals. In 1996, the City of Gazzo Veronese acquired the portion of the wetland lying within the boundaries of the Veneto region and entrusted its management to WWF Italy. Nowadays, the Busatello Marsh extends over an area of 81 hectares straddling the provinces of Verona and Mantua and is one of the few freshwater wetlands still remaining after the Valli Grandi Veronesi reclamation works. Since it has been recognised as a Site of Community Importance (SCI IT3210013), it no longer runs the risk of disappearing.
Undeniably, the stars of animal life in the Busatello Marsh are the birds that build their nests, spend the winter, or simply stop here during their migration. Among them is the Purple Heron that arrives with springtime.
This bird is characterised by its large size, a slender build, a long neck and long legs and a striking red stripe running down its neck, which makes it easily recognisable in flight, especially compared to the Grey Heron.
Though it is no longer in danger of extinction, this species is vulnerable in Europe, as it suffered in the past due to extensive killings for its feathers and suffers at present due to the destruction of its habitats.

Fill out this form to receive our periodic newsletter.
* Mandatory fields.
COOKIE POLICY
This site uses proprietary and third-party cookies to send you advertisements and services in line with your preferences.
If you want to find out more or deny your consent to all or some types of cookies, click here.
By closing this banner, scrolling down the page or clicking on any element on it, you give your consent to the use of the cookies.
I AGREE