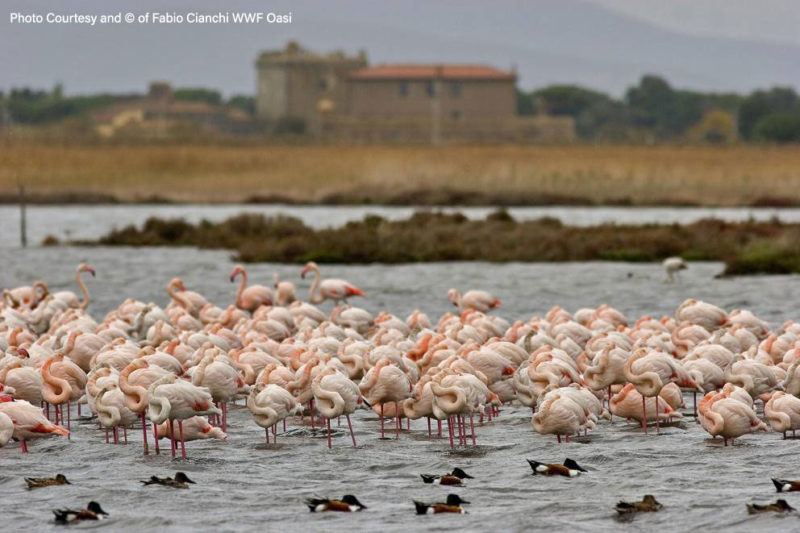 Natural Reserve of the Orbetello Lagoon

It was 1964 when two young ornithologists, Fulco Pratesi and Hardy Reichelt, discovered in the Orbetello Lagoon a colony ofblack-winged stilt, elegant birds that, at the time, were on the verge of extinction in our country due to hunting. This is where, in 1966, Pratesi had the idea of founding the WWF. In 1971, the Orbetello Oasis was established and its management was entrusted to the association.
The history of the oasis is a string of successes: from the qualification, obtained in 1977 as a “wetland of international importance” for the presence, in winter, of more than 10,000 aquatic birds to the establishment of a state natural reserve encompassing a 300,000 m2 core area (1980). Over the years WWF engaged in legal battles and purchased 600,000 m2 of land to save this area from property speculation. In the early 2000, it acquired another 1.1 km2 of land.
Today, among the many species that populate the oasis we find the elegant greater flamingo (Phoenicopterusroseus), which, only thirty years ago, was very rare in Italy’s coastal wetlands. This species is present in Italy with over 4000 breeding pairs and can be observed in some WWF oases: besides the Orbetello Lagoon, in Tuscany these birds can be seen along the shores of the Burano Lake. A fun fact: their pink colouring is due to a red-orange pigment (carotene) they obtain from their diet of crustaceans, aquatic invertebrates and blue-green algae, and hence it may vary individually as a function of a bird’s age and eating habits.